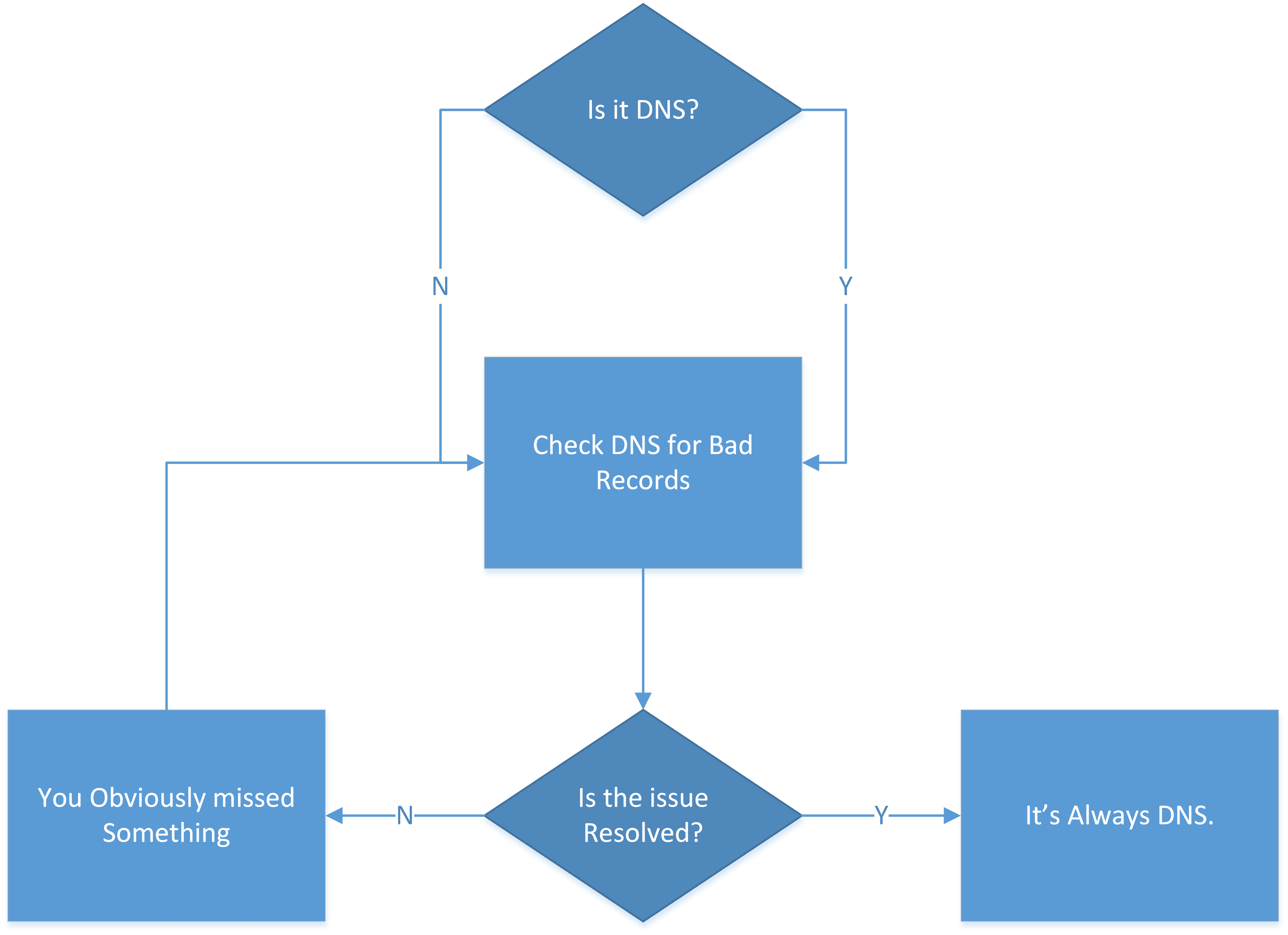 Brought to you by the “I hate Mondays” department of Tales Of A Tech.

We would like to remind you that if there is a problem and you can’t seem to figure it out there’s always one solution to look to: It’s ALWAYS DNS.

Last night I was trying to login to this site in order to make a post about my drone shenanigans (which, by the way, is here).  I was already super frustrated because Mass Effect: Andromeda is coded by a team of (apparently) monkeys who don’t understand how to make working autosave features (my autosave files are all corrupt, causing me to lose 5+ hours of gameplay) and the site wasn’t being cooperative.  I was reaching “blow-your-top” levels of frustration.  I was finally able to connect and login but I immediately noticed things were running VERY slowly.  It was weird, and I couldn’t figure out why. EVERYTHING seemed slow.  Even the SSH connection was jittery and laggy.

At first I thought it was a problem with the network in the apartment.  It happens from time to time.  We run a lot of equipment in our apartment.  I ran some speed tests and some other diagnostics and found that everything seemed to be working.  Very weird.

Since I managed to SSH in I decided to check some logs.  There didn’t seem to be anything in the apache log.  fail2ban wasn’t being uncooperative. MySQL was running and seemingly accepting localhost connections.  Very weird.  I resorted to the only thing I could think of next: I rebooted the box.

Everything came back up (yay) but the site was still clunky and slow (not so yay).

I decided to enable verbose logging in apache and attempt to restart the service.  It timed out. The hell?

I ran “journalctl -xe” per service failure message and noticed a peculiar entry:

Failed to start due to timeout?  Timeout of what? SO CONFUSED.

Digging back a little further I saw another confusing line:

I had a quick confab with Nick and he suggested I check if my websites were in my hostfile.  They weren’t, so I added them.  Apache startup became instantaneous.  Things seemed to be improving.  Cool.

I logged in to the website which was up and more responsive, but absolutely slow.  Very weird still.  I noticed an error on my WordPress Administration page: “curl error 28: operation timed out”

Let’s see if DigitalOcean has anything about this: Bingo!

Our engineering team is investigating reports of DNS connectivity issues while using the Google resolvers. During… https://t.co/cEpXMPJ3Nq

I edit the resolv.conf (and interfaces) to reflect a change to OpenDNS as the primary DNS with Google as the fallback DNS (as per the article linked later in the Tweet).

Boom, everything is working.