So, this is a bit of a cop-out post (mostly because I’m super tired and zapped from the first week of summer work) but I did it last year so I’m following suit on that model.

It has been exactly 6 months + 1 day in the year of 2017.  It’s time to count up the posts so far this year and see if I’ve been true to my 6/month goal.  As you know, sticking to a plan is tough for me (between budgets, and diets, and this posting stuff, I feel as though I’m compelled to do things I might not want to do; so I resist it and then feel bad that I didn’t meet my goals, this is a way for me to exert control over it all and it makes me feel better so shaddup and deal with it for a day).

In January we had 7 posts, which is a woohoo moment for me.  That being said, one of those posts (1/30: Presented Without Comment: America) is kinda a ranty potshot at our Cheeto-In-Chief and his policies. I stand by it because it needed to be said, so we’ll call this month 6.  My favorite post of January was my Titanfall 2 review, mostly because it was just fun to play and write about.

In February we also had 7 posts, woohoo! Again though, two of those posts could have probably been combined into one (they happened a day apart): the Abject Failure (Part 1, Part 2) posts.  I’m sticking to it though and they count as two posts, and even if they don’t it’s still 6 posts for the month, neener neener.  My favorite post is the Hard Drives, Size Limits post where I ranted about drives and NAS boxes, mostly because it was fun digging around with kernels and GPT.  What a weird day that was.

In March we, once again, had 7 posts! This time I’m calling all the posts valid because they were all decent.  My favorite is a toss up between: It’s Always DNS (because … it’s ALWAYS DNS) and Windows 10 Imaging Success (because it felt great to have a victory there).

In April we had 7 posts, but one of them doesn’t count (the Car Maintenance Log), so we’ll call it 6. My favorite post was Review: Parrot Bebop 2 because it’s just an amazing gadget and I <3 it.  My 2nd favorite for that month was On: WDS and Windows 7 because I learned a lot during the process for it.  I hope it helps people.

In May we had only 6 posts, but they’re all valid posts. Three of them are about the same subject (the Remote Building Entry Hacks) but they’re all different steps of the process, so they count in my book.  My favorite post is a toss up between Step 3 (because I completed a huge milestone at that point) and On: Apache and Auth (because this is the sort of stuff I started the blog about in the first place).

In June we had only 6 posts, but they’re all valid posts again.  4 of them are pairs (Car Repairs, Remote Building Entry Hacks) but still they’re all important posts.  My favorite post would have to be WSUS, Continued (because it’s what this blog was supposed to be about) or the OnePlus 5 review (because I loved the OnePlus 1, and love critiquing everything this company has done ever since).

So, if you’ve been following the saga of the Remote Door Buzzer System, you’re probably aware that we’ve finished making the template board and moved onto the case itself.

I wanted to provide an update as to the overall design.

This is what we’re looking at so far: 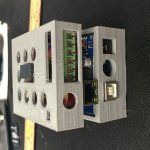 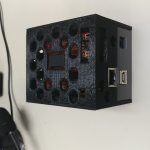 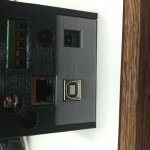 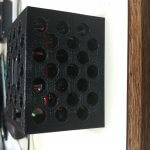 You can see the original print had all 6 header pins available, we modified that so only the 5 pins that correspond to the 5 door buzzer system lines are visible.  We’re probably going to drop the top layer down a bit to hide more of the pin header, but that’s trivial.  The cut out for the relay and the cut out for the reset button are functional.  The holes all line up (yay ventilation!).  Everything looks good.

The next step is to seal the unit up (we’re debating using brass screw inserts like these to make the case connect together, but we’re unsure how it will work with the minimum fill that we use to keep the weight down) and run some raceway down the wall.

In fact, here’s what the completed install looks like: 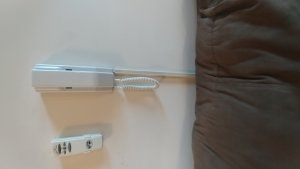 We used a piece of Cat5e cable to run the wires in the raceway. 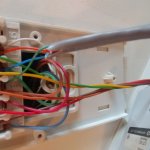 Wiring in the wall plate. 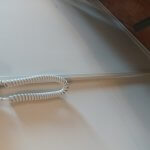 Look at that sexy raceway. 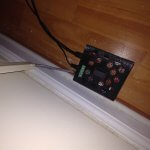 Box now sits on the floor, under the couch. 😀

All in all, this project is pretty well done at this point, at least for now.  It may be done for good since we may be getting forced to leave the apartment due to a… disagreement with the landlord.

I still want to get the audio pins to do something, but there’s problems with interpreting raw audio signals on Arduinos, and there’s been a lot of discussion on it.

There are some guides here and here but I’ve read horror stories of fried Arduinos because the input sound signal is +/- 5v, and the -5v on an input pin can result in lots of bad news.  I wanted to dive into that aspect of it immediately but it’s also summer and summer work is generally nuts so I won’t have time to work on the development of it for a while.  Womp womp.

I may end up investing in an audio shield, but I don’t know how it’ll go because they mostly use 3.5mm jacks as input and all I need is a wire lead. 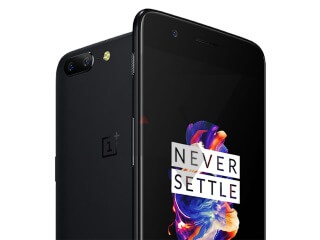 In the ongoing saga of getting our remote door buzzer system done, we have reached a major milestone: I’ve put the components on a prototype stackable board (as opposed to the quick prototype side board). This meant a lot of soldering and a lot of wiring to figure out.  It was a very strange process, but Dan gave me a hand to me and we figured it out slowly but surely. 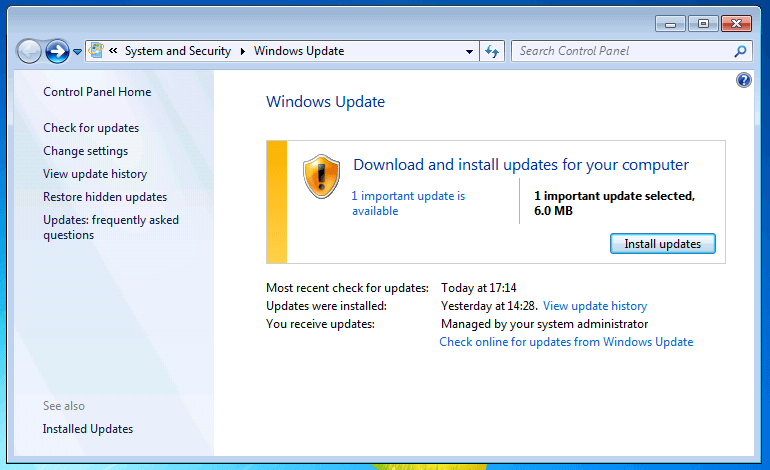 So, yesterday we came to the decision that we were happy with the way WSUS was doing updates for the Middle School.  It was decided that it was time to expand the roll out to more of the district.  The 4th/5th Grade building is getting new desktops this year, and so is half the High School, so that means they’re not super high on the priority list.  That really leaves the three K-3 buildings.

So, we added them to WSUS via GPO and bad things started to happen… 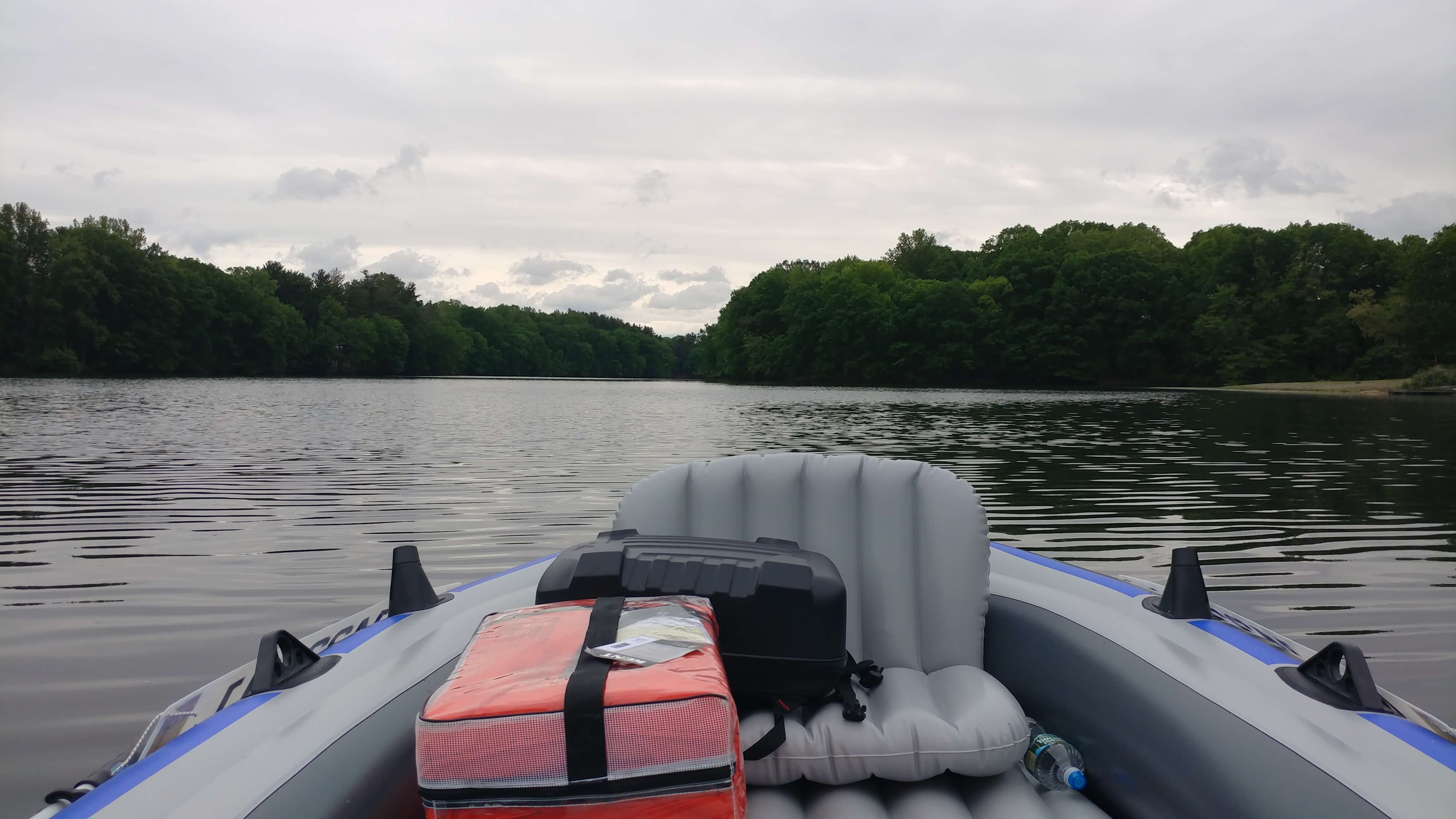 Butttttt a hard wood floor that I could then build off of would be even better.

So, here’s the plan.