So, we’ve now got a working prototype built.  It does the following bits:

After doing some research on how to best accomplish a bunch of these tasks I stumbled upon an awesome library that is taking care of a lot of the heavy lifting for me: Blynk.

Basically, the Blynk library gets pushed onto your Arduino and uses a wide variety of hardware to communicate.  We are currently using a HanRun HR911150A which works as an Ethernet Shield W5100, thankfully.  You import the library as part of your sketch, upload it to the Arduino (after adding your API Key), and it allows your Arduino to talk to your smartphone, Android or iPhone.  It doesn’t care.

Here’s the code we have so far:

That’s all there is to it.   The rest is done in the app itself, as per the screenshot: 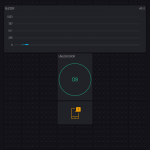 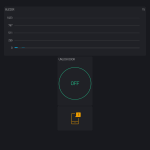 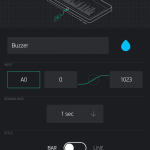 Setup for the buzzer graph 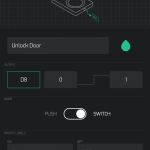 Setup for the door trigger button 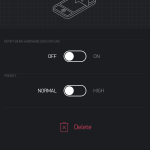 I don’t know why my voltage divider is providing different data values here, nor why the code that worked previously in the alpha revision didn’t work in this revision, but here are my guesses:

This is all conjecture, I don’t have proof yet, but it’s something to work on before I make a final build on a true board.

Regardless, this whole project is really cool and I’m so glad it works.