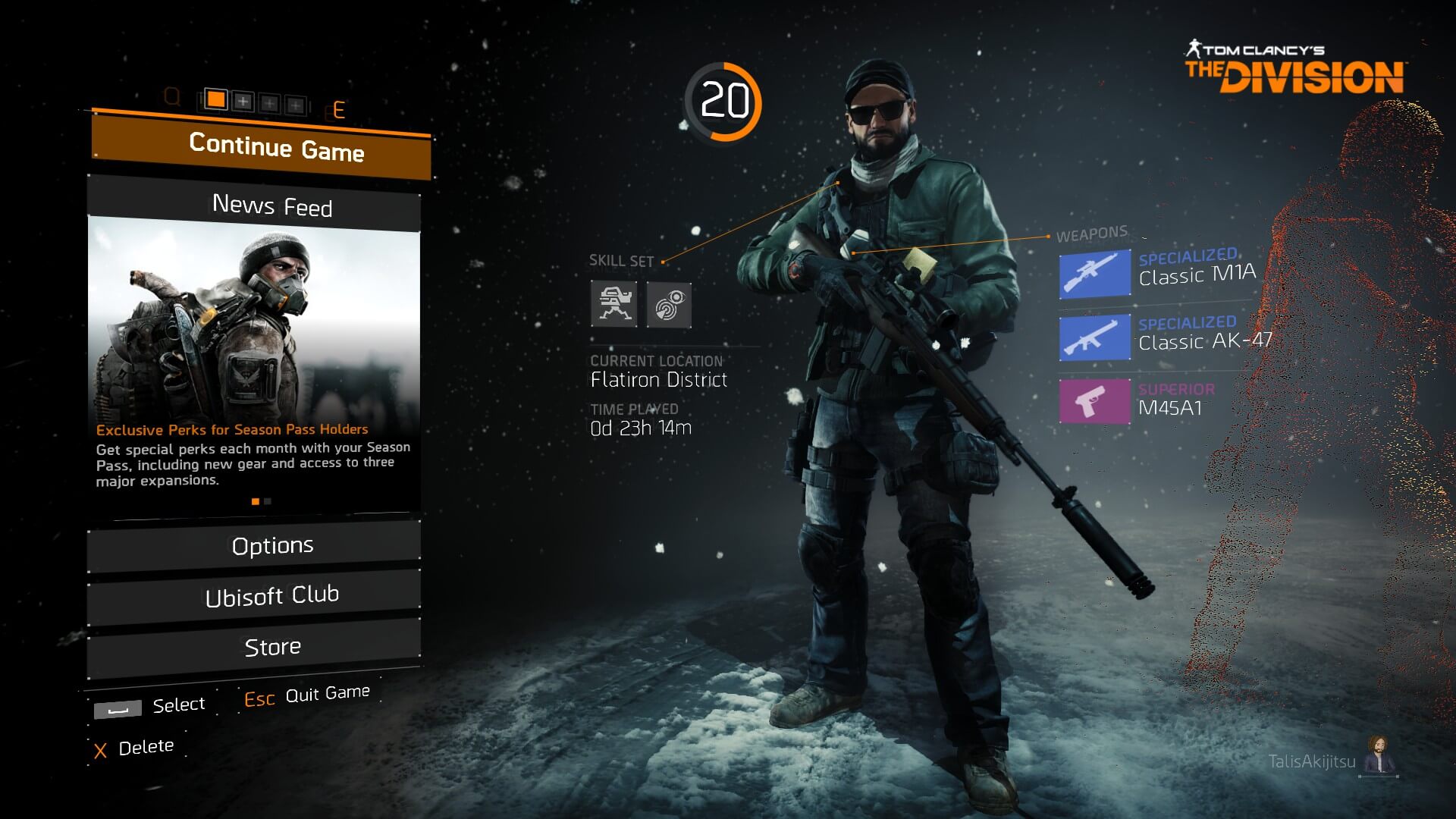 I’ve been playing The Division pretty much since the day it came out, and I have to say: I’m very impressed with it so far!  It’s a very enjoyable game with a lot to offer.  There are some problems with it, for sure, but it’s a solid 7/10 or 8/10 game.

Let’s start with the basics.  I take The Division to be a 3rd-Person Over-The-Shoulder Tactical Combat Role Playing Story-Based Shooter.  That is to say: there is inventory to manage, skills to manage, weapons to customize, and character appearance to manage.  These are all elements of role playing.  The story elements are all there.  The game play is over-the-shoulder third person (see my screenshot gallery and game play video) tactical.  You need to be moving in and out of cover (dodging and pinning to walls, cars, etc) in order to survive.

Edit: It’s come to my attention that the video I uploaded skips a lot of frames.  I will be correcting it tonight.  Sorry!

Edit 2: The video has been replaced.

To start with, one of my major complaints: The side missions are a little bit repetitive.  The locales are different each time you go to do one, and that adds some variety to them but honestly it always boils down to: save the hostages, turn the water back on, assassinate a key figure and their lieutenants, complete a virus scan and data upload, or the like.  This is really my ONLY complaint about the game so far (after 24 hours of game play).

My second complaint would be that the game suffers from a bit of console-itis.  It feels very much designed to be a console game and then modified to be a PC game.  It’s not a major complaint, but I can feel it as I play the game.  Specifically the limited number of character slots and the way you interact with the interface seems very much console-y.  I play primarily on the PC (though I played the beta on PC, PS4, and Xbox One) and it’s mildly irritating at best.

My other complaint would have to be the always-on game play.  If your internet connection drops you will be booted.  You cannot play offline (though you are in single player) as a result.  You do not need to interact with other players unless you want to.  This means you are never fighting for resources or to get to the mission NPC/mob first.

Onward to the good stuff.

It’s got an actual story for one thing!  NY has been hit by a deadly (engineered!) virus.  You’re an agent of The Division, a ‘sleeper cell’ of sorts trained by the government to handle extreme situations.  This qualifies.  It doubly qualifies after the first wave of Division agents end up MIA/KIA/turned rogue.  The story is pretty engaging and you’re a big part of it (between figuring out how it started, who made it, what they did to make it, and why they made it).  It’s got me coming back every night for at least two hours a night.

It’s got a LOT to do.  There’s a lot of collectibles. There’s lots of side missions.  There’s a lot of story missions too.  There’s also ‘random’ encounters.  I am still trying to find all the collectibles.  Thankfully after you clear a zone it will show you where they’re all located.  You still need to go find them, but it’s a lot easier when you know where you’re supposed to be looking.  Considering how big the map is, it’d be ridiculous to find them all manually.  I know people relish that sort of hunt but I prefer to spend my time doing other things.

The enemies are varied and fight each other.   There are a bunch of factions (Rikers: people who escaped Riker’s Island; Cleaners: city people determined to clean the infection by any means necessary, usually by setting pretty much everything on fire; Rioters: people who just want to cause havoc) and they will fight each other in the street.  They fight over weapons, supplies, and just because.  Everyone seems to be out to get everyone (or to get their way).  It’s entertaining to duck and cover behind a vehicle and watch two gangs fight each other then mop up.

There’s lots of ways to dispatch enemies too.  You get 3 weapon slots (2 primary, 1 sidearm) as well as 2 skill slots (for the various skills like Ping, Turret, Shield Wall, Health Pack, etc).  All the weapons fall into specific classes for ammo (sidearms have unlimited ammo which is a little weird to me considering the realism elsewhere) like Assault Rifle, Marksman Rifle, Light Machine Gun, etc.  Finding ammo is dependent on the enemies you kill, and your available ammo: the more ammo you have the less you’ll find.

There is crafting of gear and weapons for your pleasure as well.  You can find the items to craft with strewn about the world, or you can break down items that you’ve collected.  The gear you can craft depends on finding or earning plans via missions.  It’s a little frustrating at times because if you play like me you level much faster than the missions require.  This means all the crafting gear is pretty mediocre by the time I’ve earned the plan to make it.

PVP isn’t forced down your throat and it also doesn’t feel like a requirement to advance in the game.  There’s a whole section of the map cordoned off, called the Dead Zone.  The Dead Zone is considered inhospitable.  This is where all the PVP encounters happen.  You can engage the NPCs there,  but you can be shot by other players (rogue agents).  They can then be hunted down.  Loot must be extracted which sets up great periods for ambushes.  PVP is a fun way to break up the game play, especially if you have some people to group up with.

Cooperative game play is encouraged and welcomed.  The maps scale to the number of players and their player levels.  In this way, The Division feels almost like a RPG.  It’s a fun experience.

The game is absolutely beautiful.  The scenery is well done and definitely enforces the ‘Oh shit’ feeling of an apocalypse-torn area.  This holds especially true for an area as populated as NY.  There are day/night cycles and changes in the weather.  Glass is breakable and you can shoot out tires (though, oddly enough, only if you shoot them in the center of the hub cap, not in the actual tire). Take a look in the Gallery below.

You have a base of operations which provides perks and a place to resupply.  Part of the game involves completing the previously mentioned side-missions and encounters to collect supplies (Tech, Security, Medical) in order to upgrade your headquarters.  There are currently 10 upgrades per wing and each provides new perks and upgrades to skills and parts of the headquarters.  It’s a cool little mini-game addition that I’d miss if it weren’t present now that I’ve played it.

I haven’t finished the game yet (this is a big plus) and I continually look forward to playing it.  Even taking the time to write this quick review of it is making me want to just play more.  It’s addicting game play.  It’s an ‘open’ world story-driven experience that I am very happy with.  There are flaws, for sure, but they are greatly outweighed by all the fun I’m having playing the game.

Edit 3: Total play time: 52 hours. I am now at End-Game with daily missions being the goal. Around hour 50 I collected all the intel. This game was worth every penny I didn’t spend because my roommate is awesome and got me it for my birthday. That being said, it’s absolutely worth $60. I don’t say that about many titles. I’m rapidly approaching a $/hr figure that is something I haven’t seen in a while.

Here’s some game play in a video format.