Disclaimer: PC Master Race. I own a PS4, an Xbox One, an Xbox 360, and custom-built desktop PC. Of the 4, I prefer gaming on the PC. I always will.  That being said, there’s a frustrating trend in gaming that I’m seeing and I’d like to talk about it a bit, especially since I’m STILL waiting for a game to be launched.

It’s summed up pretty well with this tweet from Deus Ex:

Here are the launch unlock times for #DeusEx #MankindDivided. We can’t wait for you all to play! pic.twitter.com/JXxvqVmY1U

So that means someone like me is STILL waiting for the game to unlock on Steam. 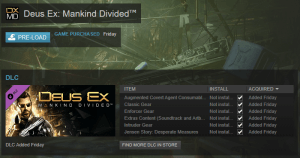 I’ve had the game pre-ordered since October 2015.  People on PS4 and Xbox One in Europe have been playing since Midnight.  In America, since Midnight or 3AM, depending on which time zone they’re in.  The disparity is a frustrating, disturbing trend in gaming that I’ve seen for a while.

I get it, staggered launches, server load, etc.

Deus Ex: Mankind Divided is a story-driven single-player game.  There’s no server load to be concerned with.  There’s absolutely NO reason to launch on consoles before PCs.  There’s absolutely no reason to have staggered launches across time zones.  This is just a continuing failure from the same company that brought you this clusterfuck: The Augment Your Pre-Order System.

The system received HUGE backlash from the gamer community.  It was scrapped.

Lets hope people start wising up to the release delays and start seeing a similar backlash.

Because it’s now noon.   And my game still hasn’t unlocked.

And I’m starting to get annoyed.