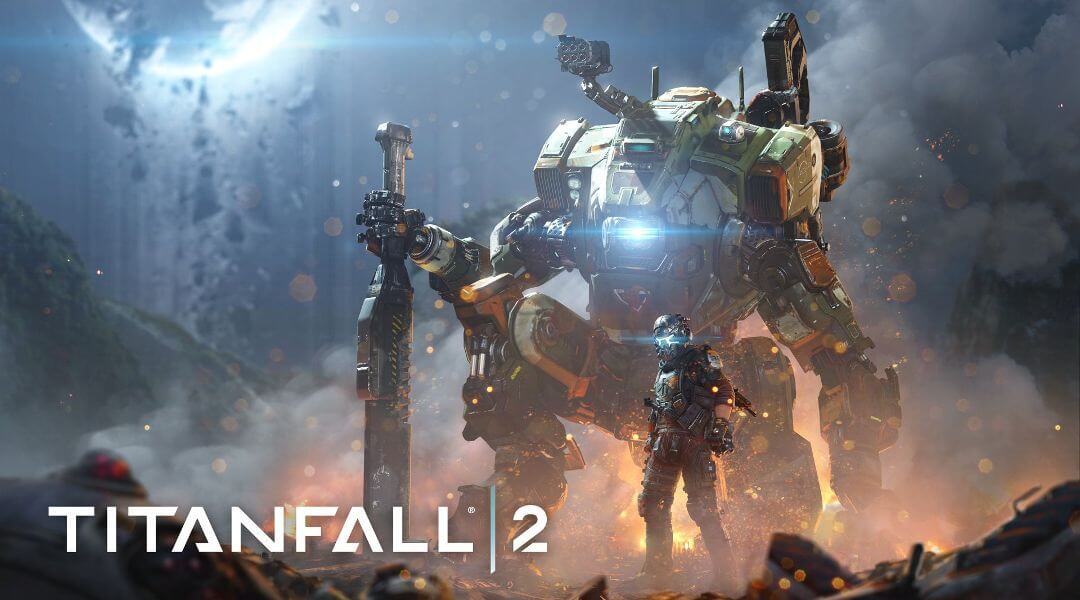 The game play of the campaign seems like a pretty good introduction to mechanics of the multiplayer (which I admittedly have not touched much of just yet).  You start out as a rifleman in the Militia, fighting against the IMC.  You are training to become a Titan pilot by your mentor.  It’s an interesting start.  After doing the training you are dropped into your first mission, as a rifleman.  During the course of events of the first mission, you become linked to a Titan, BT.  BT is with you throughout the rest of the game.

Game play is pretty fast paced.  The concept of the pilot is demonstrated by the trailer video:

It’s a fast-paced game because the pilot is agile and deadly.  You are sliding, running, boosting, and wall-sliding all around.  My only complaint would be there are a LOT of jumping puzzles and they aren’t always straightforward.  That being said, the game acknowledges that and gives a ‘ghost’ mode to show you how you should be able to complete the puzzles.  I only used it once, but it really saved my patience.  That isn’t to say that the game isn’t frustratingly difficult at times  (Viper boss fight anyone?) but I got through it over the course of a week with maybe 21 total play hours.  That doesn’t sound like a lot but I also haven’t touched the multiplayer nor found all the trophies.  That’s coming next.

The weapons feel powerful, and I’m not just talking about the Titan weapons.  The pilot has access to an arsenal of weapons from knives and pistols up to sniper rifles (including a double-barreled sniper rifle, like what?) and rocket launchers. The Titan has weapons ranging from 20mm AP cannons and gatling repeater cannons to laser rifles and rocket launchers. Each of these weapons fits a different play style and speed.  All the weapons feel different from each other and the report of each of the weapons makes them feel powerful and useful.  I was very impressed with it.

The game is full of cool little moments that make you develop a connection with your Titan.  The game really pushes hard the premise that the link between a pilot and Titan is what makes them unstoppable.  To that end, BT (the Titan you link with) has some witty banter back and forth with you.  You can choose to respond to BT in whatever method you want (super serious or light hearted options are usually prevalent) and BT will respond in kind (or in confusion, if you use an idiom that he doesn’t understand like I did on more than one occasion).  As you progress through the game I felt a bit of a connection to BT too.  He felt like more than a machine by the end of the game.  That made the ending SUPER frustrating, especially since the game puts you through it twice.

As you play the game, you and BT get captured.  BT gets beat to hell and destroyed.  You salvage his core, and the Militia sends you another Titan of the same class.  Once you connect the core, BT comes back just as he was.  That was gut-wrenching enough to begin with.  Then, at the end of the game, BT sacrifices himself to save you (and the planet).  He’s gone for good, and there’s no way to save him.  That REALLY annoyed me.  More than it should have, it’s just a game after all.  Nevertheless, I was VERY annoyed with it.

All that being said, the game is very enjoyable overall.  My absolute favorite moment is when BT saves my ass when I’m on top of a transmission dish.  It was such a funny moment that I captured it via PS Share here:

The ‘facial’ expressions (if there is such a thing on a Titan) are very expressive.  Combined with the flat voice of the Titan makes this scene just perfect in my eyes, and hence why I captured it.  It was used in one of the trailers, but they cut out the parts that make it perfect (the flat “Got You” and the confused look until BT understands the “Thumbs Up” sign).

So I would definitely recommend picking up Titanfall 2.  I played it exclusively on PS4, but it’s available for Xbox One, PS4, and PC via Origin.  I can’t imagine the game being too different on the other platforms.  It’s absolutely a step above Titanfall, and in a bit of a twist they claim that there will be no DLC but free updates and maps to be added on later on.  We’ll see if that holds true.

Design: 9/10
– Varied weapons and maps with environments.  NPCs are varied enough.  Good differentiation in enemies, but it does sometimes feel like cannon fodder (especially Titan vs enemy infantry).

Overall Length: 9/10
– There’s an awesome campaign mode that gave me already 21 hours of game time.  I haven’t completed all the trophy hunting, nor have I touched multiplayer.  It’s no Witcher, Mass Effect, or Elder Scrolls, but it’s plenty long for a FPS.

Titanfall 2 is a surefire win and a damn near perfect game in my book.