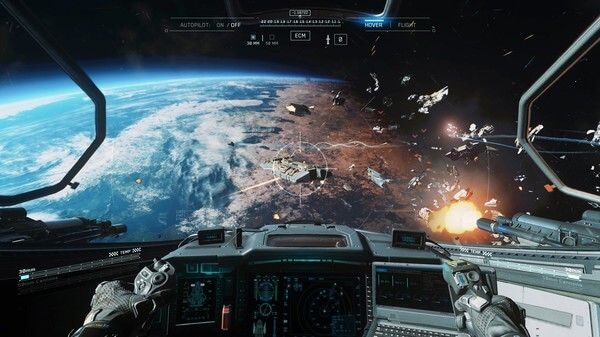 So I purchased Call of Duty Infinite Warfare on Steam for myself during Christmas because I wanted a mindlessly fun FPS to play during winter break.  I got exactly what I paid for, and I’m largely happy about the purchase.  I do have some minor nitpicks and gripes about the game and gameplay though, and hence we’re having a review.  I started this review as a draft in early January, and I’m just getting around to it.  So here we go.

As always: spoilers ahead.  This is a reveal of the plot points of the game.  I will try and avoid any major things, but one of my major gripes has to be addressed here because it bothers me to this day.  Ergo: SPOILERS AHEAD.  Do not read this section if you intend on getting the full story experience from the game.  This is also a test of the new spoiler tags.  Hover on the blurry text to almost see, click to actually read.  Kinda neat.

Overall I’d rate the plot at a 5/10, because it’s basically Call of Duty in Space and the same as pretty much every wartime Call of Duty game. The plot was interesting, but obviously a repeat plot.  The frustratingly scripted events detract from what could have been a great game.  Furthermore, the war isn’t completed by your actions in the game.  It’s left open.  There should be more content, but there isn’t.  Maddening.  Just maddening.

Gameplay is nothing really fancy at this point.  There’s a lot of jumping and wall-gliding and things we’ve seen in a lot of games starting with the last revision of Halo.  Space combat is a fairly neutered affair, but is entertaining in the small batches you get of it.  It’s basically: go fast, go slow, aim, shoot, rinse, repeat.  The launch sequence gets super boring around the 5th time you do it (except for going into space from planet surface, which was ALWAYS fun).  Hacking robots was entertaining right up until the point where I realized that it was just easier to shoot them in the face a bunch.  Style points are absolutely awarded for the amount of customization you can do to your guns and your fighter.  Those options (mods, colors, etc) are unlocked by progressing through the game and make accomplishments feel worth-while.  The game is kind of open-world-ish in that you get to choose your next target on the map.  That being said, all the options feel hollow as they don’t really change any of the outcomes.

I cannot attest to much in terms of multiplayer since I only have a few hours in it, but it is fast paced and brutal.  Weapons feel powerful, specials and kill-streak gear are all devastating when used properly.  It’s a hectic death and spawn match. The various gameplay modes have me going back to this game once a week or so.  I will say that it does keep me coming back for more.

Overall I’d give the gameplay and style a ballpark average of a 7/10.

I don’t know how else to say it, so let’s cut straight to it: this game was GORGEOUS on my PC.  I have (or at the time I was playing this, had) an XFX R9 390X 8GB video card which handled everything the game threw at me at 1920×1080 on High Graphics settings. The game was smooth, colors were crisp (if drab a lot of the time, but that’s more style than graphics complaint).  Reflections looked great, as did smoke and lighting.  It looked realistic as all hell it could be.  The screenshots on Steam do it some justice, but not enough in my opinion.  I don’t have a lot of them myself, but you can view the screenshots here.  Faces looked real.  The speaking was a little off at times (in relation to the movement of the models in the game) but mostly during the random walking around – the generated scenes were spot on all of the time.  Great stuff overall here.  My purchase included a revamped version of Modern Warfare in a remastered format.  That game shows signs of age, but it’s from 2007, so there’s really only so much remastering they can do there and it’s not really fair to hold it against Infinite Warfare’s score.  Overall I’d grant the graphics a solid 9/10 for stunning space scenes, vivid explosions, and campy zombie gameplay mode.

This game was pretty solid.  The campaign was fairly long and entertaining (if not completely frustrating…).  Multiplayer was fun and keeps me coming back.  Despite the ‘mixed’ reviews recently on Steam, I’d recommend this game if you’re looking for some fun, straightforward combat.  This game has kept me entertained for a while, and I foresee it keeping me entertaining for a while longer too.  The zombie mode and remastered versions of Modern Warfare alone are pretty much worth the price of admission.  Factoring in Multiplayer and Singleplayer standalone, this game has pretty good value in my book.