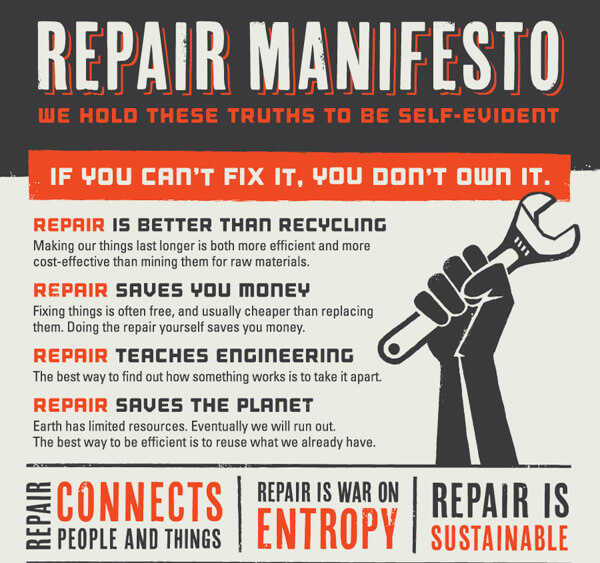 Filed under: “Was-There-Ever-A-Doubt” and “Obviously” categories, both Apple and AT&T have come forward to spearhead the fight against the Right To Repair.  Anyone who knows anything about Apple is not at all surprised by this completely-unexpected-and-not-totally-what-they-have-always-wanted move.  Where I’m from we call this a “Dick Move.”

Apple is notoriously anti-repair.  A lot of tech corporations are, in fact.  However, reviewing Apple devices on my go-to repair site, iFixIt, reveals that Apple devices were becoming easier to repair, which honestly surprised me (their latest offerings getting 6 and 7 on the repairability score, up from the 2 that the original iPhone got).  Many thought that the trend was because Apple was embracing the idea that people should be able to repair their devices and keep them around for longer.  Apple does, after all, care about the environment, consumers and all that good stuff right?

Apple is going after a Right to Repair bill in Nebraska under the argument that self-repaired devices are more likely to explode or catch on fire if there is damage to the battery and that alone should prevent people from working on their devices.

This is, of course, a laughable argument.  This isn’t a Samsung Note or something.  So long as you don’t poke the battery with a sharp stick (or short the contacts) you won’t have any problems with the battery in your iPhone.

I do agree that working on fine electronics is delicate work and has inherent risks.  There is no arguing against that.  That being said the risks are understood and taken willingly by the people who do this kind of work.  There are entire communities built around repairing devices to extend their useful period.  The Right To Repair also keeps planned obsolescence in check by keeping manufacturers honest.

When a device fails, the immediate reaction from most people is to rush out and purchase replacements.  Replacing a device without even attempting to repair it is absurd.  This is the method that Apple is trying to force upon people though.  If you bring your iPhone to an Apple store to repair something (say, a busted screen or maybe just crappy battery life) and don’t have the warranty on it, they’re going to give you a figure that will make your jaw drop.  Here’s the screen replacement cost for an iPhone.  Look, even if you have Apple Care you’re talking at least $30, and without up to $150.  Keep in mind: we’re talking about the glass here.  Not the LCD/Digitizer.  That would be an extra fee.  The entire LCD assembly is ~$90 (depending on model, sometimes less) which includes the glass and LCD and Digitizer.  If your LCD is damaged, we’re talking about a huge savings.  If the repair at Apple crests the $350 mark, most people will just consider buying a new phone outright.  That’s Apple’s play – they want you to buy a new device.  It’s better for them in the long run.

I fix things for a living (or at least, I did for a time, but that is changing at work now; that’s a story for a different time) and there is nothing more satisfying than ripping something apart, fixing it, putting it back together, and having it work properly.  I am a tinkerer.  I am an explorer.  I poke around the insides of technology because it is entertaining to me.  I enjoy every second of it.  They’re hoping to outlaw it and make it more difficult for your devices to get repaired in a timely, inexpensive manner.  It’s just wrong on practically every level for the consumer.  There is absolutely NO benefit to the consumer here.

Things I am not arguing for:

Things I AM arguing for: