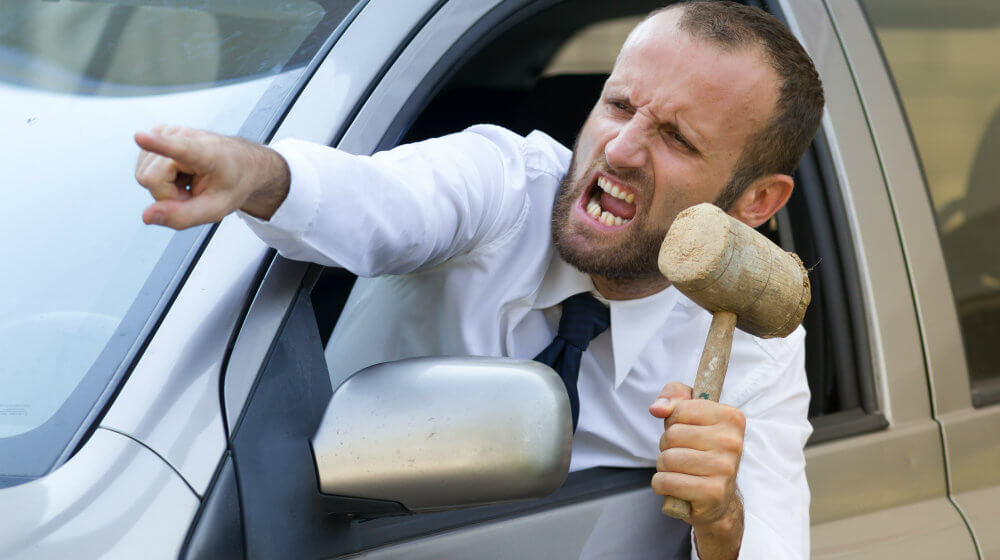 I know, I know, I know, I feel like I’ve covered this topic a million time at this point but it really ticked me off this morning and so I’m going to talk about it again: driver’s in NJ are just terrible.

In the past I’ve talked about how bad NY and PA drivers are, but after driving out through to Michigan and beyond a few times I really just need to say it: NJ drivers are just terrible, horrible, horrific, assholes.  Anyone who has driven in or around NJ will probably secretly agree.

People from NJ probably won’t, because they largely think everyone else is just horrific and they’re just driving to deal with it.

This story begins very similarly to the last story of this type: my morning commute, specifically leaving my apartment complex. 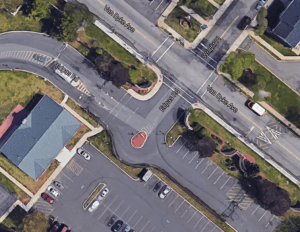 This is the entrance to my complex.  Look, we have a neat little circle.  And a guard shack!  You’d think the traffic pattern would be pretty easy to follow and use, right? 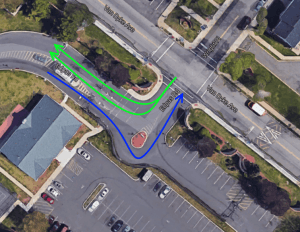 You see, exiting traffic is supposed to go around the circle.

Except people don’t always do that.

Those people are what we call: dicks (sorry Nick).

This is what people actually do, note the inclusion of the Red line: 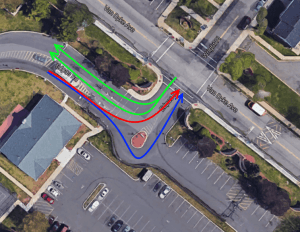 People tend to cut the line.  A car that gets to the exit of the development should get to the road first, if everyone takes the blue path.  Some vehicles cut the line via the red path.

This is what happened this morning.  A medi-transport van (one of those SUV’s with Medical Transport plastered on the side of it) had been following me through the development and riding my ass the entire time.  We got to the exit and we waited for the gate to open.  The gate opened.  I waited for the pedestrians at the lot gate to leave, the van honked at me.  I ignored it.  The pedestrians got past the intersection in front of me, and I proceeded through, taking the blue route.  The van blew past me taking the red route, nearly hitting the pedestrians.

Normally I just deal with it, curse them quietly in my car, and move on.

Today I laid on my horn as long as I could.

I raged out.  I nearly entered the intersection and caused and accident because I was going to fly up to them and give them a piece of my mind.

I was in full-on rage mode.  There was no calming me.

I’m so unequivocally mad about it and I’m sick and tired of seeing it.

I seriously want to go to my apartment tonight and wait for that van to show up just to bash all the windows out and slash all the tires.

The development needs to do something about this: it is unsafe and it is irresponsible to continue to allow it.

I propose the following solution, outlined in Orange. 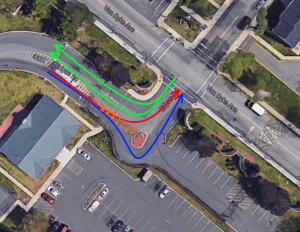 That’s right: one-way-only spike strips.  Ideally installed under the cover of night SO NOBODY KNOWS and all the dicks get their tires wrecked.  Fuck those people.

I’d prefer a wall, but traffic does need to get to the lot on the other side of the complex there (to the right of the blue lines) so this is really the only solution.

Time to get on it, Hampton Club.  I know you’re not keen on doing any sort of enforcement of the rules (I mean that car was parked illegally next to me since Friday night, was still there this morning, so clearly you just don’t give a flying fuck) but this is a safety thing.  If you’re not willing to install them, then maybe I’ll do it, guerrilla warfare style.  I’ll be sure to give Nick warning if I do.  Maybe.

This shit seriously needs to stop.

This bothers me so much because the rules of the road are what make driving a statistically safe process.  When we abandon those rules in favor of saving time (in this case, maybe 5 seconds tops) we are saying: the safety and well-being of people on the road and in the area is less important than your specific timetable.  It’s inherently wrong.  Frustration abounds.  It’s a simple set of rules to follow and I just don’t understand why people CAN’T FUCKING FOLLOW IT.  It makes me irrationally angry.  VERY angry.  Ugh.