I’ve been playing a lot of this game recently (I mean, well, a lot, considering I only got the game on 3/12) and I was also involved in 2 of the betas (one closed; one open).  I must say, they got a lot right here, but there’s still room for improvement.

So I’m going to talk about it, and you’re going to get a review.  Maybe we’ll start a discussion.

Spoilers ahead, as always.

So there are a ton of regions (21 ish?) each with their own bosses and missions.  That being said, the missions (especially the side missions and supply pickups) can get a little repetitive and boring.  That being said, it’s a completely open world.  There are no restrictions on where you go.  You can go into mission zones before you have the mission.  You won’t complete the mission, but you can clear things out and get a feel for the area.  It’s kinda neat the way they set it up.  You can pickup every weapon, every skill point, every addon without doing a single thing.  I wouldn’t recommend it, but you could do it.

The things you do in the missions seem to have an effect on the world in general, at least with your interactions with people in the world.  Walking through towns people will recognize you as the people who have done things in their region.  Early on, you and later on the people will say things like “Thank you, my brother was tortured by ” — it’s a nice little touch.

I haven’t completed the game yet.  I’m not even 1/3 of the game in.  I’ve been doing a lot of exploring and a lot of gun finding.  I needed to find a good sniper rifle (you find the M40A5 early) and a good scope (you don’t find a good scope for a while — but I found one by going to a far away province).  I’m now using the G36c (my favorite rifle, which was a pre-order or a rewards point purchase on uPlay) and an MSR sniper rifle with a 6x scope. 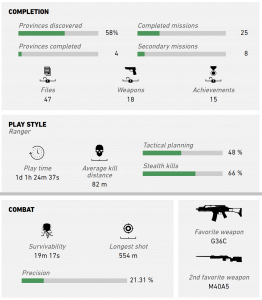 I also love to fly, apparently, which is not surprising.  I tend to leave the driving to other people, but I can fly with the best of them (usually).

Overall, I’d rate the plot a solid 8.  It’s a little Team-America-World-Police-y, but it makes sense in a Hollywood sort of way.  I can’t say it’s perfect, but it’s pretty damn good overall.

If a picture is worth a thousand words, a video is worth at least as much.

Here’s a clip of some gameplay that I captured.

The gameplay style is tactical action.  Stealth is clearly the preferred option in this game, as the alarms can result in a large swam of bad guys VERY quickly.  You didn’t get to see that in the clip because I actually completed this part of the map fairly well, all things considered.  The bad guys can swarm in pretty fast and they’re pretty accurate too.  You need to be careful and use stealth to your advantage.  Terrain, cover, walls, and silencers are incredibly useful.  Even standing in a shrub is better than walking out in the open.

All that being said, there are times to go loud.  And there are lots of different ways to go loud, as evidenced by my drone with a bomb strapped to it.  It’s great at sneakily blowing up targets and wrecking mayhem in a camp.

In single player you can order your squad-mates to shoot specific targets in a coordinated fashion.  This is incredibly useful.  In multi player you’ll need to communicate with your team to get that sort of effect.  You can still mark the targets, just need to manually shoot at them.

All in all the Gameplay & Style earns this game an 8.

The gameplay video above shows just how pretty the game can be.  This was at ultra settings, and it can go higher (I lowered it for recording purposes).  The night vision and thermal options are pretty and useful too.  Night vision adds a realistic tint of green and thermal vision applies to everything.  My only complaint is that targets that get shot immediately fall off night vision — which doesn’t make sense since body heat doesn’t disperse instantly.

Overall the game is flat out gorgeous.  The regions are varied in appearance.  Lighting is cool too, and I -think- it has an effect on your ability to be detected.  I have been playing at 1920×1080 at Ultra with extra customization to make it slightly better quality.  I’m getting great FPS usually. There are some slow down moments, but they’re few and far between.

The campaign is pretty long, but usually boils down to the same types of missions over and over again.  The supply collection feels like a forced grind.  That’s a severe point against it.  The gameplay style and graphics more than make up for this point against it.