Oh, boy howdy, I don’t know how to start this one, honestly.

But I’m going to.

Because he was right.

So let’s start from the top.  Our district is moving to Windows 10, hopefully this coming year.

To facilitate this, we are working on Windows Deployment Services.  We started with the easy stuff: Windows 7.  I banged that one out of the park, including drivers.  I was thrilled.  Coworkers seemed thrilled.  Time to move on to Windows 10.  WE HAVE THE POWER!

EVERY thing I’ve tried to get Windows 10 imaging & deployment has failed (pretty spectacularly, I might add) in varying ways.

My process at the start was:

These steps went MARVELOUSLY.  I was ecstatic.

The capture went smoothly, so I went to deploy it.

It deployed to a physical machine.  Hurrah!

Great, so our Windows 10 machines that we used downgrade rights to get to Windows 7 were not working.  What the hell.

Then it was time for vacation, so I stopped.  I made a note to try and figure out what was going on, trying different editions of Windows 10.

I tried Dell Windows 10 media: it did not activate.  What the hell!

I grabbed the Windows 10 Education WIM and tried to deploy it as a stock image from WDS: It deployed, but Windows did not activate.

So I grabbed the Windows 10 Pro WIM and tried to deploy that as a stock image from WDS: It deployed and Windows did activate.

So I tried a different method:

Immediate problem: trying to do Windows Updates on the 5040 results in a failure to boot after the reboot, says Windows failed to install.

Well, what the hell.  Windows was installed.  OK.  Google search says that you can’t do a build upgrade in Audit Mode. 😐

Ok, so then I tried this:

We moved onto this:

Now that I’ve got a base Windows 10 Pro Education installation in WDS, I tried the following:

I’m going to try again tomorrow because I was frustrated at work due to some major car repair bills (I love my Escape man, but what the hell Ford, $6k for exhaust manifold gaskets, transmission gasket, timing chain cover gasket, and exhaust y-pipe replacement? Plus another $1k for the water pump, spark plugs, and a single spark plug coil because I had a spark plug ejection during vacation) so I may have been distracted. 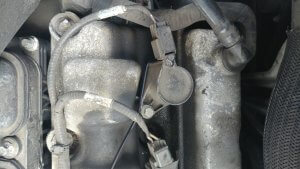 That’s what a repaired-but-broken coil looks like on my Escape.  Zip ties man.  Always zip ties.

At least, that’s the plan so far.

And so far, we’re doing alright.