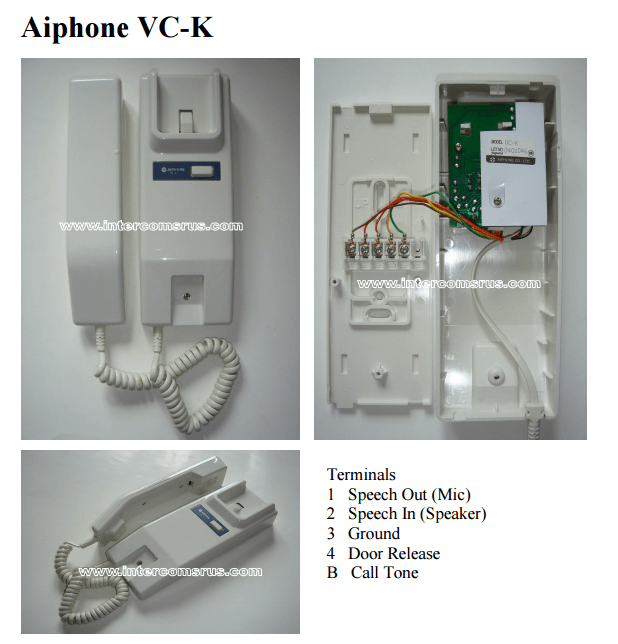 Sooooooo last night my roommate and I started talking about ways to make entry/exit of the apartment easier, and I brought up Smart Door Locks. This naturally led us to a discussion of how we could get someone into the actual building so we could then let them use the Smart Door Lock to get into our specific apartment.

He mentioned it would be cool to have some sort of remote control for the buzzer/intercom system and I said it’s so funny you say that because I’ve been thinking about that too.  I said, it’s probably a simple wire jumper that triggers it.

Well, I was right.  And now I have a new project to work on. 🙂  This will be an on-going series, because I think this is fscking awesome.

So we crack open the phone on the wall and start poking around in it.  5 wires.  Seems straightforward enough.  We find a wiring pin out guide on the good ol’ internets (which, by the way, if you haven’t reported to the FCC that you are in favor of Title 2 Provisions for Net Neutrality you REALLY SHOULD BE DOING THAT RIGHT NOW INSTEAD OF READING THIS) and start tinkering. Looking at the wiring guide, we see Pin 3: Ground and Pin 4: Door Release.  Should be trivial.  We poke a multimeter set to Ohms on those pins and check.  High resistance.  A lot in fact.  Cool.  We press the button.  Resistance drops to zero.  Yesssssss.  Direct connection.  Awesome.  I grab a short length of wire and short Pin 3 to Pin 4: the door system activates and unlocks.  YES.  Awesome.

So now we need to figure out how we want to be able to trigger it.  Something on the network would be nice.  Wifi, preferably, so we don’t need to run a wire.  My first thought is a Raspberry Pi or an Arduino.  Nick has always wanted a Pi, so he might be buying it.  I have more experience working with them.  It should be a fun collaborative effort.

The idea would be to have the Pi or Arduino running a small webserver with the ability to send/receive email (this is why I think the Pi wins out, we can have some lightweight Linux doing all the major brain work, I think?). If the Pi senses activity on Pin 5 (Call Tone) send an alert via sms or email that the door has been buzzed.  If we’re expecting someone, we should then be able to press a button or navigate to a webpage that will allow us to press a button that will trigger Pin 3 to short to Pin 4, triggering the unlocked door.

I have a Raspberry Pi I plan on using for a Magic Mirror… So maybe we’ll play around with that.  It should be as simple as a Python script making function calls reading the status of pins… Might not even need a true web server for it.  Python is amazing.